As COVID-19 collides with HIV/AIDS, the pandemic may be taking an ominous turn

As the world less affluent countries scramble for COVID-19 vaccine and contend with deadly surges of the disease, researchers in South Africa have just documented an ominous development: the collision of the pandemic with HIV/AIDS. 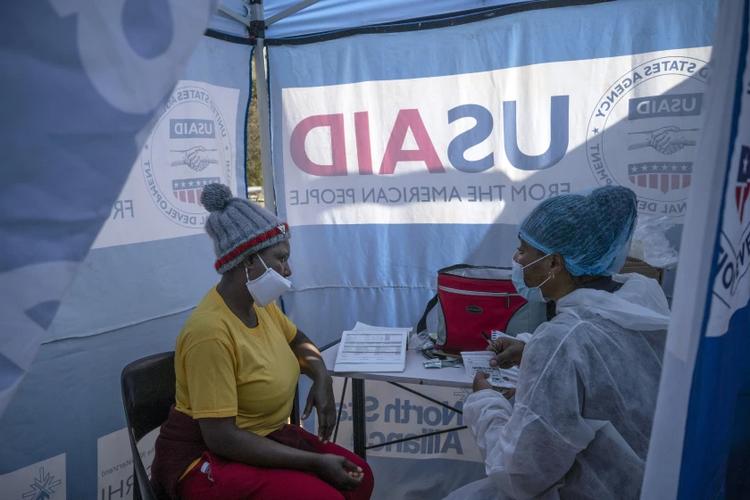 A nurse talks to a patient who is HIV-positive in Ngodwana, South Africa. The collision of COVID-19 with HIV/AIDS has the potential to make the pandemic much worse, scientists say.

Geneticists and infectious disease specialists there have uncovered potentially dangerous coronavirus mutations in a 36-year-old woman with uncontrolled HIV who was unable to shake the SARS-CoV-2 virus for close to eight months. The driving force behind the patient’s rapid accumulation of genetic changes is probably her impaired immune response due to her unsuccessfully treated HIV, the researchers said.

The case highlights a difficult truth: that affluent nations racing to vaccinate their own populations will remain vulnerable as long as the coronavirus is spreading and mutating in low- and middle-income countries, where lack of vaccine has kept COVID-19 immunization rates low. That’s especially true in countries like South Africa, where HIV infections are common but often undetected.

While the South African patient was diagnosed with HIV back in 2006, doctors had been unable to control her viral load with standard antiretroviral therapy, and her immune system’s population of CD4+ T cells — which may play a role in clearing coronavirus infection — were very low.

For 216 days, the woman continued to test positive for the SARS-CoV-2 virus. She was hospitalized with moderate illness for nine days in September soon after she contracted the coronavirus, but she never became severely ill with COVID-19.

Still, the coronavirus that lingered in her body underwent 13 genetic changes related to its crucial spike protein, along with at least 19 other genetic shifts elsewhere that could change the behavior of the virus.

The new findings raise the specter that HIV/AIDS — a 40-year-old scourge that has killed 32 million worldwide — could complicate efforts to eradicate a COVID-19 pandemic that has killed more than 3.5 million in less than a year and a half.

Until the South African patient, there has been little evidence to suggest that HIV-infected people could complicate the pandemic’s trajectory. HIV-positive people were not known to be more likely to become infected with the coronavirus. And research had suggested they did not suffer worse medical consequences of COVID-19.

But if her case turns out to be typical, that picture could change: HIV patients whose infections are not controlled with medication could 'become a factory of variants for the whole world,' said Tulio de Oliveira, a geneticist at the University of KwaZulu-Natal in Durban, who led the new research. 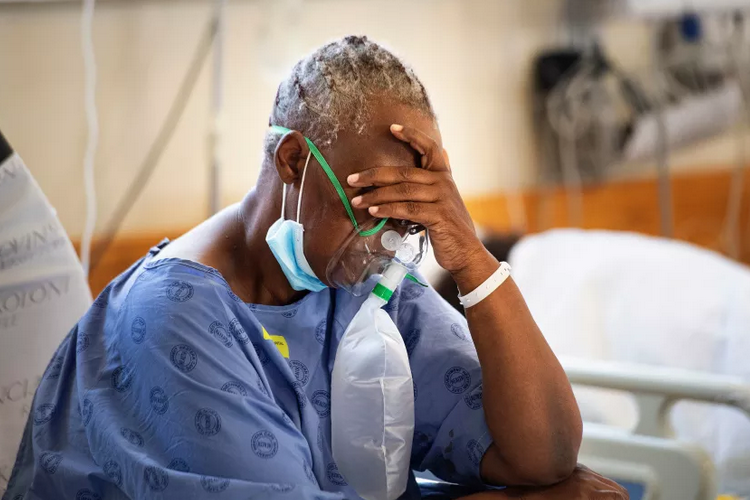 A patient breathes in oxygen in the COVID-19 ward at Khayelitsha Hospital about 20 miles from the center of Cape Town.

Worldwide, roughly 8 million people are thought to be infected with HIV but unaware of their status. An additional 1.7 million are on antiretroviral medications that aren’t working well.

'This is a syndemic,' said Dr. Jonathan Li, using a term that describes the confluence of two epidemics with the potential to worsen outcomes for both.

An infectious disease specialist at Brigham & Women’s Hospital in Boston, Li was one of the first to document the proliferation of significant coronavirus mutations in a single immunocompromised patient who could not clear his coronavirus infection for more than five months and succumbed to COVID-19 last summer. His case put doctors on notice that such patients might be powerful incubators of viral variants.

Li’s largest patient population is people with HIV. From the time that potentially dangerous coronavirus variants began emerging, he said he’s had his 'fingers crossed' that people with HIV would not turn out to be a source of mutations that could make the virus more transmissible or harder to prevent or treat.

'This is one of the first reports that some of my fears may be coming to fruition,' said Li, who was not involved in the new research.

This is one of the first reports that some of my fears may be coming to fruition.

The South African patient contracted the coronavirus in September at the beginning of the country’s second surge, though she was infected with a strain that had been dominant during the country’s first wave of infection.

More than 30 genetic changes were detected in the patient’s viral samples over the next 27 weeks, including a handful known to strengthen the virus’ ability to resist the vaccines and drugs that prevent or treat COVID-19.

Were they to begin circulating widely, they might have become the stuff of public health nightmares: 'escape variants' capable of prolonging the pandemic.

t’s not yet clear whether any of the mutations she harbored spread to other people. But the researchers said it’s probably not a coincidence that dangerous new variants have emerged from populations like those in South Africa’s KwaZulu Natal province, where more than 1 in 4 adults has HIV.

The patient was the subject of a briefing last month to an organization of Africa’s public health ministers, and details are expected to be shared with leaders of the World Health Organization soon. A case report was posted Thursday to a website for researchers to seek feedback on their work before formal publication.

It’s too early to know whether the woman is an outlier. But the report of her case has been widely anticipated by other scientists who are eager to vet it. 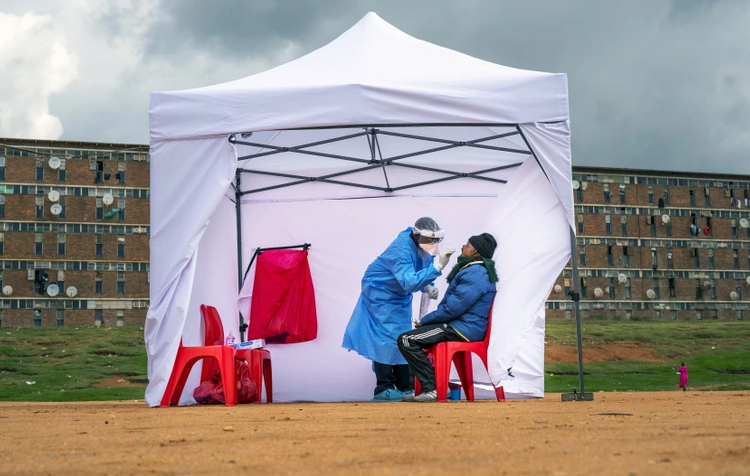 A resident from the Alexandra township gets tested for COVID-19 in Johannesburg, South Africa.

Among the surprises: The mutations that emerged in the South African patient did not seem to be a direct response to powerful medications aimed at treating COVID-19. The primary treatment she received in the hospital was supplemental oxygen.

Indeed, had she not been enrolled in a study of COVID-19 patients with HIV or tuberculosis, she probably would have been unaware that she might be spreading newly hatched viral variants to others. In all likelihood, her case would not have attracted further scrutiny.

Instead, she became one of the 300 participants whose bouts with COVID-19 were studied to better understand how HIV affects the progression of and immune response to a coronavirus infection. Her blood was tested for SARS-CoV-2 on the day she joined the study and seven times afterward.

About six months into the research, two of the medications in her antiretroviral HIV cocktail were replaced. Within two weeks, her HIV was under strict control and she had cleared her SARS-CoV-2 infection.

Four others in the study had coronavirus infections that lasted longer than a month. The researchers plan to look for variants in their samples too.

Expanding testing and treatment for those with undetected HIV 'would reduce mortality from HIV, reduce transmission of HIV, and also reduce the chance of generating new COVID variants that could cause other waves of infections,' he said.

South Africa, which is home to nearly 2.2 million untreated people with HIV, had vaccinated just 183,000 people as of May 31, causing health authorities to fear a new wave of infections.

India, currently the site of the world’s worst COVID-19 surge, has almost 1 million people with untreated HIV infections. Only 12% of Indians have received a first shot of COVID-19 vaccine, and 3.2% are fully vaccinated.

For the sake of comparison, the United States has provided first doses to 51% of its population and fully vaccinated 41%.

'We have to make a commitment to making vaccines available globally,' said Walker of the Ragon Institute. 'And we have to be particularly responsive in areas where infection is advancing most rapidly.' 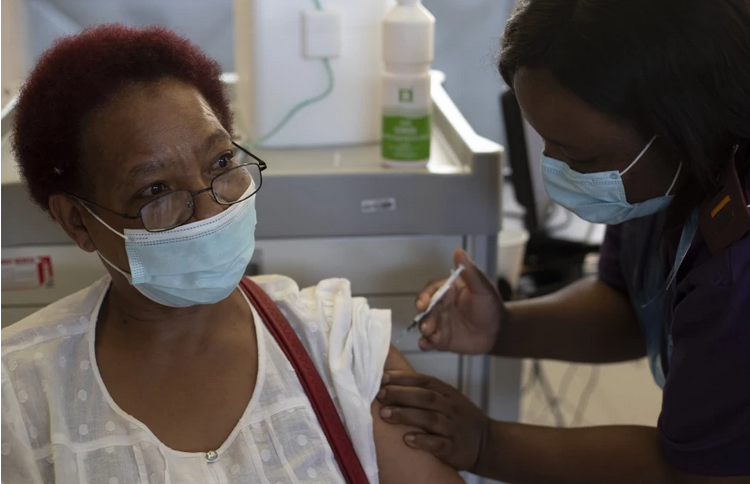 The woman’s case may also help explain why more than half of the new coronavirus variants detected to date were first documented in Africa.

The continent is home to an estimated 7.5 million HIV-positive people who are not effectively treated with antiretroviral therapies. Most have impaired immunity, giving the virus a longer period to replicate and mutate.

But the prospect that untreated HIV could complicate the COVID-19 pandemic’s endgame also suggests a way to address both problems in tandem, with synergistic effects, De Oliveira said.

'This could be a golden opportunity to control the HIV epidemic and protect the world from variants,' he said.