How South African Researchers Identified the Omicron Variant of COVID

Little is known about the Omicron variant, which was first detected in Southern Africa, but the nature of its mutations and its seemingly rapid emergence have concerned governments around the world. Interview with Prof. Tulio de Oliveira at the New Yorker. 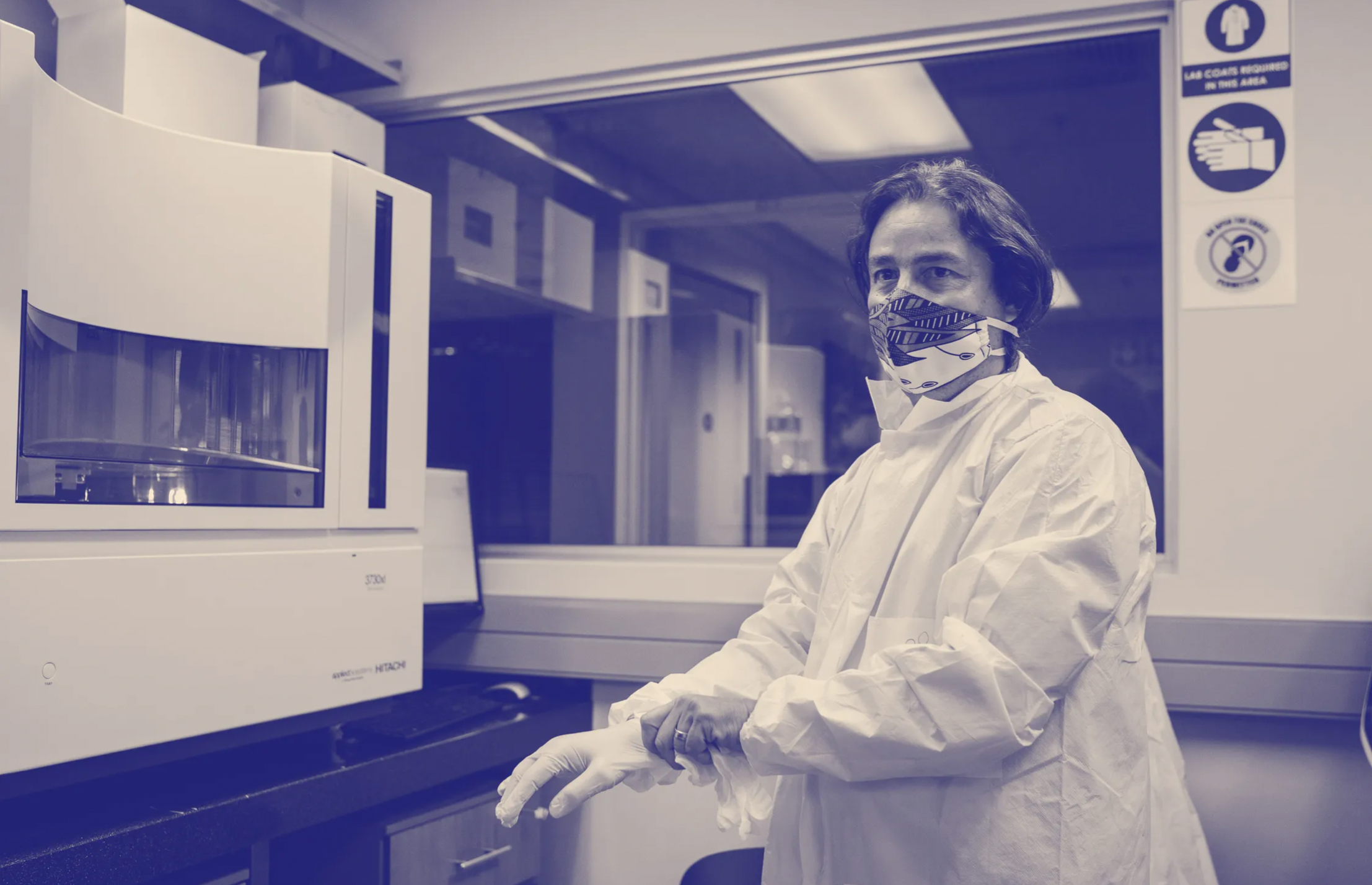 Tulio de Oliveira in his lab at the Nelson Mandela School of Medicine in Durban, South Africa.Source photograph by João Silva / NYT / Redux

Scientists are currently working to decipher how contagious and how deadly the new variant is—and to what extent it is able to evade any of the protections offered by existing covid-19 vaccines. In the meantime, the United States, Britain, and much of Europe have imposed travel bans on Southern Africa; Japan, Israel, and Morocco have banned all foreign visitors.


I recently spoke by phone with Tulio de Oliveira, the director of the Centre for Epidemic Response and Innovation at Stellenbosch University, in South Africa. De Oliveira and his team were the scientists who first alerted the World Health Organization and other authorities to the new variant. During our conversation, which has been edited for length and clarity, we discussed how he first learned about the existence of Omicron, how travel bans might impact future international coöperation, and why South Africa’s vaccination rates are lagging behind those of wealthier countries.


When did you first have a sense of the existence of this new variant?

I am the principal investigator and leader of the Network for Genomic Surveillance in South Africa, which involves seven genomic facilities distributed across the country. There was an uptick of cases in Gauteng Province. It was only a small uptick—we had around two hundred cases in the whole country every day. But they started growing, and so we met with our network and said we needed to understand why they were growing in the province that had the largest previous wave of infections of Delta. That variant was extreme in Gauteng, with somewhere between sixty and eighty per cent of people having gotten infected by covid, according to serology testing.


So on Friday, November 19th, we decided that we needed to increase genomic surveillance in Gauteng. And by last Tuesday we heard from one member in our network that a private lab, Lancet Laboratories, had sent in six genomes of a very mutated virus. And, when we looked at the genomes, we got quite worried because they discovered a failure of one of the probes in the P.C.R. testing. We went back to all the national data and noticed this failure was increasing in a lot of the P.C.R. tests. The P.C.R. tests still worked because they had three probes, but one of them was a failure. And then we discussed the six genomes. We were surprised, but we had to make sure it wasn’t just a small chain of transmission. It was widespread. So we had that meeting last Tuesday, and I asked for samples from other labs.


When I noticed that mutated variant on Tuesday, I phoned the director general of health, and he told me he would set up a meeting with me and the minister of health in thirty-six hours. So we had thirty-six hours to confirm whether it was real. At the same time I wrote to the World Health Organization, because I am a part of the virus-evolution working group. The next morning, we got over a hundred samples from over thirty clinics in Gauteng, and we started genotyping, and we analyzed the mutation of the virus. We linked all the data with the P.C.R. dropout, the increase of cases in South Africa and of the positivity rate, and then we began to see it might be a very suddenly emerging variant. By Thursday morning we got all the genomes back, and they were all the same variant—around a hundred randomly selected samples, from all over Gauteng, in which the same test failed. By then I was confident enough to present the results to our minister of health, and minister of science and innovation, who took the results quite seriously and asked me to talk to the President, Cyril Ramaphosa, at half past 10 a.m., which I did.


He looked at the results and got the comments from the ministers, and by that time the first reports were coming in the media of a potential new variant from Southern Africa. So the President gave a simple answer: it is better that we present it in a transparent format, because we have enough evidence. And then he asked the minister of health to organize a press briefing at midday. So the time from when we discovered the variant and then confirmed its existence in hundreds of samples across the province to when we presented it to key ministers and talked to the President and went public with it was around thirty-six hours.


What are you trying to learn about the new variant at this point?


Last Wednesday, we spent all this time organizing and analyzing the data, but we also had the first discussion with the W.H.O., and we also discussed the data with three or five of the top evolutionary biologists in the world, in the U.K. and in the United States. As we discussed the data on Wednesday, they were all concerned about the number and location of the mutations. On Friday, we released hundreds of genomes and data on the other testing, and we had a meeting of the W.H.O. technical working group on virus evolution. The group decided to classify it as a “Variant of Concern,” which is very unusual, because we thought it had very concerning mutations and epidemiological data. This included data on reinfection, which showed this variant can potentially reinfect people. And so on Friday the W.H.O. sent out their press release, and gave a Greek name to the variant, and highlighted that it was a “Variant of Concern” to the world.


Can you talk about the covid situation in South Africa before this?


I would break it into two periods. The situation in the last month was of minimal infections, about two hundred infections per day with a test-positivity rate of less than one per cent, which means that we had more than enough testing. Some scientists thought we wouldn’t have a fourth wave because we had such a high level of population immunity. So during that moment in the last month, we thought that’s it. We won’t have any more problems with covid. People were relaxed, thinking that we could go back to normal life. Even my lab was sequencing other pathogens and viruses because that is what we do.


So we were very surprised to see a variant emerge in a place with the highest population immunity in the country. I think that is one of the things that the world doesn’t realize. Some people tried to blame the variant on vaccine hesitancy. We have a problem with that, although potentially not as big a problem as the United States. But people really thought we got out of the woods. Unfortunately, the new variant emerged, and it seems clear that it can reinfect people, which is potentially the last nail in the coffin of herd immunity, which one of your Presidents famously talked about.


You mean the last nail in the coffin of the idea that herd immunity will protect us?


How has the vaccination campaign been going in South Africa, and do you connect the new variant to the slow speed at which many countries in Southern Africa began to get vaccinated?


The first thing to understand is that Johannesburg is what Atlanta is to the United States. It is our biggest travel hub. So we have no idea where this variant is from. It could be from South Africa, or it could be from anywhere else in the world or Africa. What we know is that it got amplified in South Africa.


I think it did not help at all South Africa or Africa to have such late access to the vaccines. It was only around May, June, and July that we started to have enough vaccines for the population. And this is in South Africa. In Mozambique, they are still at around ten per cent of full vaccination and they have a real supply problem. We also had a massive supply problem until we gave up depending on covax from the W.H.O. and started procuring them independently. So they arrived far too late, followed by the third wave of infections. We have about twenty-five per cent of the population fully vaccinated, and that number has increased a lot. But, again, in countries like Botswana, they paid almost double the price for Moderna vaccines they have not yet received. So, in general, Africa got in the back of the queue of the vaccine.


So, I would be very reluctant to blame the problem on vaccine hesitancy, because that’s everywhere in the world. And I personally am very upset with the events of these last two days. The U.K., after praising us for discovering the variant, then put out this absolutely stupid travel ban, and it has hoarded vaccines for the last year. It’s trying to put the blame on vaccine hesitancy. It’s looking for a reason to fault Africa. And we are honestly tired of this—after not having access to vaccines, having to pay more expensive prices, having to get in the back of the queue, and still doing some of the best science on covid in the world, because not only did we identify this variant, but we identified the Beta. We also helped the U.K. to identify the Alpha, and have been transparent with the results. And each time it seemed that the world wants to find fault with Africa and doesn’t recognize the absolute lack of support. Sorry. I get quite cross about that.


You described your government wanting to share this information with the world. And I know one argument people make against travel bans is that if countries know that they’re going to happen, they’ll be more reluctant to share information.


Yes. I cannot see how other developing countries would share information as we shared information given what’s happened with the backlash against South Africa. I cannot imagine it.


What are you most interested in learning about the new variant now?


At the moment, the most crucial question that we have to answer is: Do people who get infected with this variant, despite having been previously infected or vaccinated, develop any serious disease? And, unfortunately, we’re only going to be able to answer that question in the next few weeks, because we believe—and the top scientists in the world believe—that this variant only emerged around two or three weeks ago. So it needs time for people to get infected and develop symptoms to get hospitalized. That’s a question of time, and you probably noticed that [Anthony] Fauci highlighted that.


The other question that we want to answer is: How effective is the vaccine against the variant? We can answer that in two ways. The first one, as I just highlighted, is following people who are vaccinated and infected to see if they develop disease. And the other one is by replicating the virus in a lab, and then exposing this virus to the plasma of people who were previously vaccinated so you can see if the antibodies that they have developed can kill the virus. You can do that in a live virus, which is the gold standard, or you can do that in a pseudovirus assay, where you add the mutations of the virus to a normally inactivated virus backbone. So, those are the true crucial questions.

Isaac Chotiner is a staff writer at The New Yorker, where he is the principal contributor to Q. & A., a series of interviews with public figures in politics, media, books, business, technology, and more.