Phylogenetic research 'the analysis of molecular sequencing data to study evolutionary relationships among groups and organisms' needs to be scaled up to end the AIDS epidemic, according to the participants at a symposium held on 4 June at the New York Academy of Sciences called HIV 2015: Using Phylogenetics to Enhance the HIV Response. 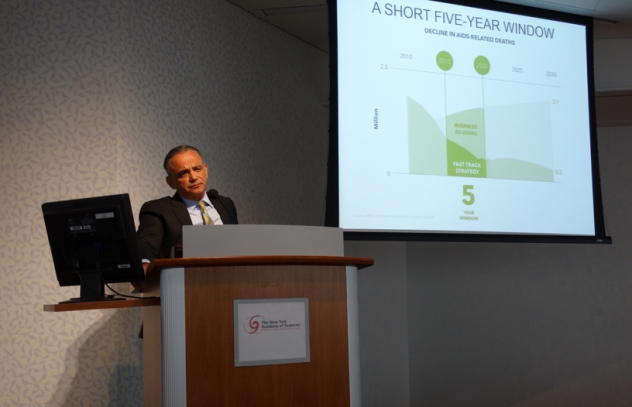 Speaking at the symposium, UNAIDS Deputy Executive Director Luiz Loures said that an evidence-driven, focused and rights-based approach is needed to Fast-Track the HIV response in the next five years and end the AIDS epidemic by 2030. 'Science has been the major component of the progress we have made so far. Advancing phylogenetics will help us sharpen our focus on the most vulnerable groups, their locations and the progression of the HIV virus,' said Mr Loures.

Molecular genetics and biodata will provide high-quality information on the diversity of HIV strains among people living with HIV and their evolution and on the dynamics of HIV transmission. 'A molecular clock study enables us to identify important characteristics of people transmitting HIV and understand how to reduce high incidence among vulnerable groups, for example young women in Africa,' said Tulio De Oliveira from the Africa Centre and the University of KwaZulu-Natal in Durban, South Africa. 'Recent advances in phylogenetic methods and molecular evolution show that data that combine genetic, spatial, immunological and social information can transform our understanding of epidemic dynamics.'

In the past few years, scientists have been closely researching the effectiveness of available antiretroviral medicines and the implications of drug resistance to tailor treatment programmes for specific populations. A phylogenetic study on HIV transmission and drug resistance in 27 areas representing 72% of new diagnosis in the United States of America, among many other findings, showed that 18.9% of men who have sex with men living with HIV transmitted drug resistance mutations between 2010 and 2012. The study also showed higher transmission rates among African-American men who have sex with men and young men who have sex with men. 'There is a great opportunity to incorporate phylogenetics and molecular epidemiology into HIV prevention and treatment programmes to improve sustainability,' said Alexa Oster, Lead, Molecular HIV Surveillance at the Division of HIV/AIDS Prevention, Centres for Disease Control and Prevention.

However, the participants agreed that the significant challenges around genetics and HIV research among key populations, including ethics and human rights issues, will need to be addressed to fully benefit from the potential of phylogenetics.

The annual symposiums convened by the New York Academy of Sciences and UNAIDS bring together scientists, activists, human rights defenders and policy-makers to discuss emerging advances in science relevant to accelerating the HIV response.