Durban, 3 December 2020. The KwaZulu-Natal Research Innovation and Sequencing Platform (KRISP), University of KwaZulu-Natal has produced over 1000 HIV-1 genomes in record time in South Africa, a significant scientific endeavor to understand how drug resistance has developed to a new and potent antiretroviral (ARV) treatment. 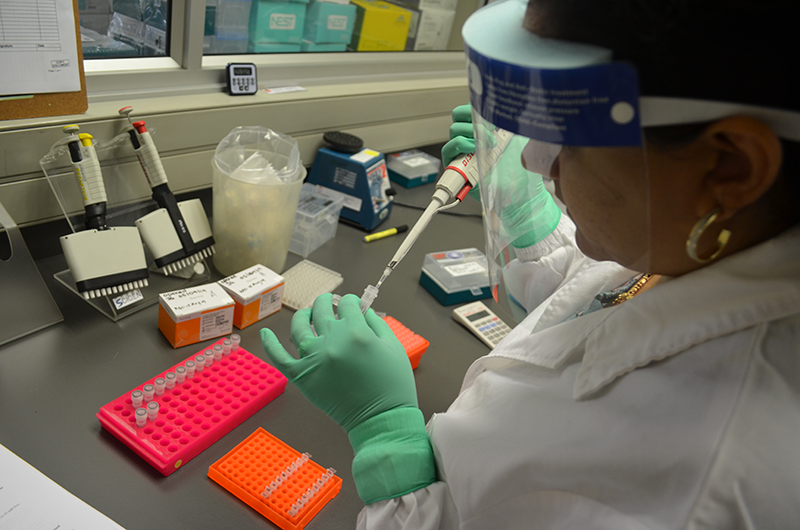 In 2019, the World Health Organization began to recommend Dolutegravir as the preferred first-line treatment for HIV in most populations in the world. Dolutegravir was dubbed a 'wonder drug' because it was safe, potent and cost-effective and scientists had seen no drug resistance against it in clinical trials. However, there is little data on the success of Dolutegravir against circulating strains of HIV in Africa.

In a study published on World AIDS Day, 1st of December 2020, in Nature Communications, an international team of researchers from South Africa, the UK and the USA examined the genetic code of over 1000 HIV genomes to determine if drug resistance mutations in 874 volunteers living with HIV, affected their treatment success. The individuals were enrolled in a clinical trial for people initiating HIV treatment to compare two drug regimens: Efavirenz, an NNRTI and prior first-line therapy in the region, and Dolutegravir.

As part of this study, scientists from the KwaZulu-Natal Research Innovation and Sequencing Platform (KRISP) at the University of KwaZulu-Natal, worked day and night to produce over 1000 virus genomes in a few weeks. “We were very excited to be a part of this project as it focused on answering one of the most important questions on anti-viral drug resistance in South Africa and the world,” said Professor Tulio de Oliveira, Director of KRISP.

Professor Ravi Gupta from the Department of Medicine at the University of Cambridge, who was part of the study said: "These results are a huge concern. Dolutegravir was very much seen as a 'wonder drug', but our study suggests it might not be as effective in a significant number of patients who are resistant to another important class of antiretroviral drugs."

The study showcased the capacity and expertise of local, high-throughput genomic research facilities, such as KRISP, to quickly produce and analyse the data needed to answer such important questions in the fight against the HIV epidemic. “This is one of the first times that such a large amount of data has been produced and analysed in such a short space of time on the African continent,” said Professor de Oliveira. “The South African government has invested millions of rands to upscale genomic research and infrastructure in the country. It is great to see this investment starting to bear fruit,” he added.

The goal of this study was to determine whether drug resistance to a previous therapy prior to starting treatment affected treatment success (suppression of the virus in the blood) over the first two years of therapy with both of these two regimens.

As expected, the presence of drug resistance substantially reduced the chances of treatment success in people taking Efavirenz, as a previous therapy. The trial showed that successfully suppressing the virus over 96-weeks in 65% of participants compared to 85% of non-resistant individuals. However, unexpectedly, the same pattern was true for individuals taking Dolutegravir-based treatments: 66% of those with Efavirenz resistance mutations remained suppressed over 96-weeeks compared to 84% of those without the mutations. These relationships held true after accounting for other factors, such as treatment adherence.

"We fully expected Efavirenz to be less effective among patients' HIV strains resistant to NNRTIs," said Dr Mark Siedner, faculty member at the Africa Health Research Institute in KwaZulu-Natal, South Africa and Massachusetts General Hospital in Boston, Massachusetts. "What took us completely by surprise was that Dolutegravir, a different class of drug which is generally effective in the face of drug resistance, would also be less effective in people with these resistant strains."

"We are working now to tease out if this was due to the virus or the participants, for instance, if people with resistance are less likely to take their pills regularly. Either way, if this pattern holds true, it could have far reaching impacts on our predictions of long-term treatment control for millions of people taking Dolutegravir in the region."

“This is an important achievement for South Africa and the continent, sub-Saharan Africa bears the brunt of HIV/AIDS. Genomic research on African soil is needed to unlock and define treatment strategies for Africa," said Prof Glenda Gray SAMRC President and CEO.

“We have to work hard that we as Africans can stop being consumers of research, but we can be leaders as well,” added Gray.

Note to the Editor:

This research project was a collaboration between the Wits Health Consortium, the Africa Health Research Institute (AHRI), the KwaZulu-Natal Research Innovation and Sequencing Platform (KRISP) at Nelson R Mandela School of Medicine at UKZN, Cambridge University, Harvard University and the Massachusetts General Hospital (MGH). KRISP has produced all of the genomes in South Africa. KRISP is funded by the Technology Innovation Agency, the South African Medical Research Council (SAMRC), the DIPLOMICS initiative of the Department of Science and Innovation (DSI) and many international funders.