Efforts to track SARS-CoV-2 sequences have helped identify worrying variants - but researchers are blind to emerging mutations in some regions. 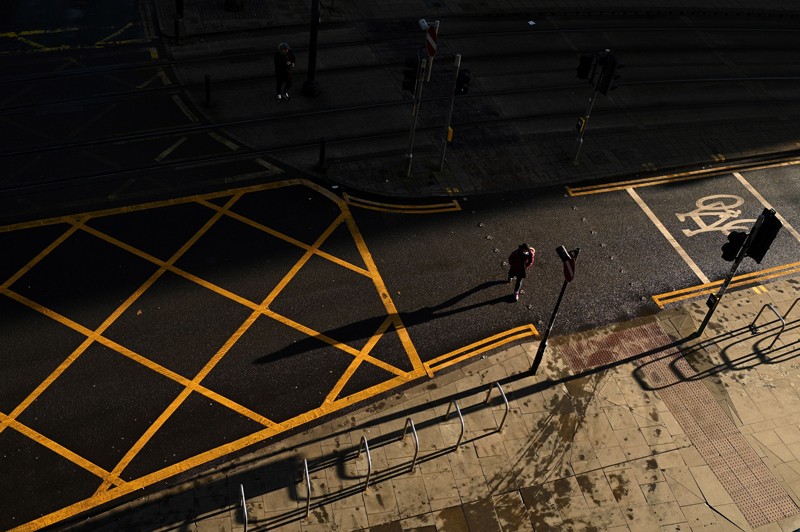 2021 is shaping up to be the year of COVID-19 variants. In the past two months, scientists have identified several fast-spreading variants that have prompted government restrictions in many countries — and new variants are being detected more frequently.

The pandemic has ushered in an era of genomic surveillance in which scientists are tracking genomic changes to a virus at a speed and scale never seen before. But surveillance is patchy globally, particularly in the United States, which has the world's largest COVID-19 outbreak, and in many low- and middle-income countries. Scientists warn that worrying variants are probably spreading undetected in these regions.

'Genomic epidemiology has come of age during this pandemic,' says Oliver Pybus, who studies infectious disease evolution at the University of Oxford, UK. It has transformed from a 'theoretical backwater' to a tool that helps drive public-health decisions quickly, he says. But to be as effective as possible, surveillance needs to be widespread, standardized and embedded in national pandemic-prevention programmes, scientists say.

The key to good surveillance is the sequencing and sharing of enough genomes to track mutations and variants of concern as they arise. In the past year, more than 360,000 SARS-CoV-2 genomes have been sequenced and stored on GISAID, a non-profit online database for sharing viral genomes. Geographic distribution of the sequences on GISAID is broad, covering more than 140 countries. But most countries have uploaded only a small number of sequences. Two exceptions are the United Kingdom and Denmark, which respectively account for 45% and 7% of SARS-CoV-2 genomes on the database.

Surveillance networks range from large national programmes to small, grass-roots operations. In June 2020, researchers launched the Network for Genomic Surveillance in South Africa to sequence SARS-CoV-2 genomes circulating in the country. The group lacked the resources to sequence large numbers of genomes, so it settled for a random sample of 50–100 a week, says Tulio de Oliveira, a bioinformatician at the University of KwaZulu-Natal in Durban and a member of the network. 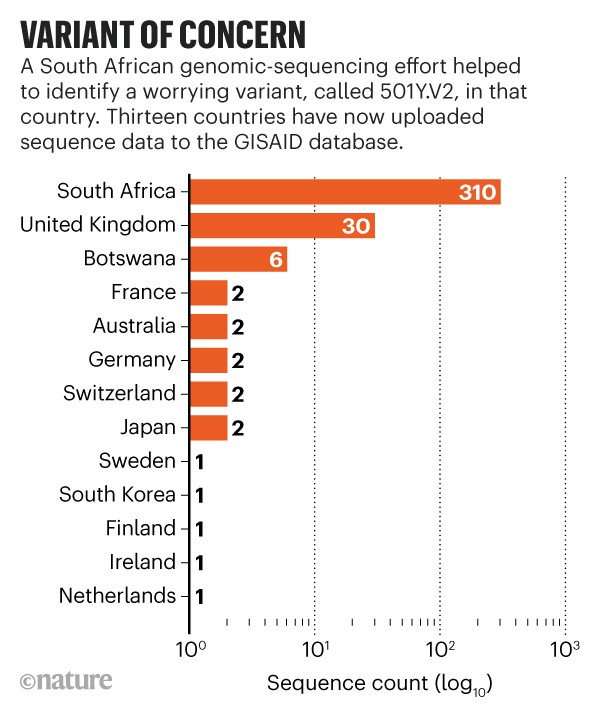 Still, the modest operation has paid off. In November, a large hospital in the Eastern Cape province contacted de Oliveira to report a suspiciously high number of COVID-19 cases in the region. His team combed through its sequence database and quickly identified a new SARS-CoV-2 variant that accounted for 90% of new infections in some regions. The variant, known as 501Y.V2, had eight mutations in the genes that control the spike protein, which it uses to enter cells — a high number compared with other dominant strains circulating in the country. De Oliveira hypothesized that the changes to the spike might make the virus better at infecting people, which could explain the quick spread of this variant.

De Oliveira shared the analysis with Andrew Rambaut, an evolutionary biologist at the University of Edinburgh who is part of the United Kingdom's genomic surveillance effort, the COVID-19 Genomics Consortium (COG-UK); in doing so, he emphasized a particularly concerning mutation known as N501Y. Rambaut's team scoured the COG-UK's tens of thousands of sequences and found a variant that shared the mutation. This variant, now called B.1.1.7, also had a batch of disturbing mutations. Rambaut's team suggested the changes might explain the variant's rapid spread across the UK late last year.

The researchers shared their discoveries with officials in both countries, which prompted tighter restrictions on movement.

Sharon Peacock, a microbiologist at the University of Cambridge, UK, is pleased to see surveillance informing policy. Peacock, who chairs COG-UK, says she faced pushback when she proposed the consortium in March. Coronaviruses mutate slowly compared with influenza, and some researchers warned that surveillance efforts would find just a bunch of meaningless mutations. But her proposal won the day — and a £20-million (US$27-million) grant. The true impact of genomic surveillance will become clear when people see evidence that it prevented disease and death, says Peacock. 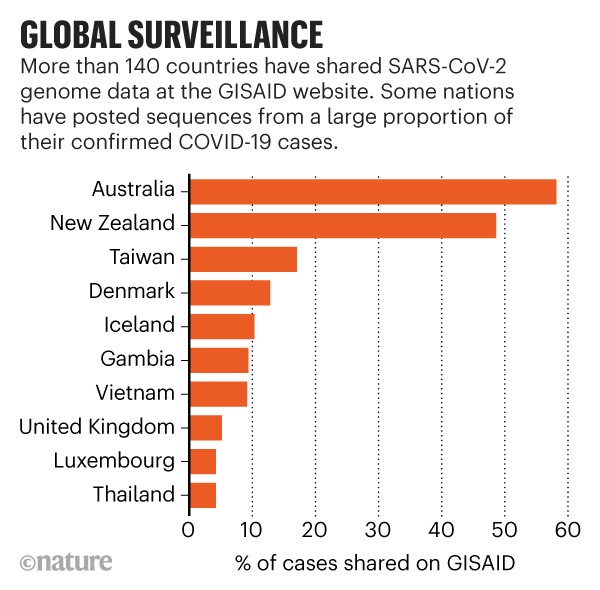 De Oliveira says that the South African genomic-surveillance network is a model for low- or middle-income countries with limited resources. 'What we did was not large numbers. It was a small number, but consistent and methodical,' he says.

The United States has been less successful in getting genomic epidemiology up and running — despite the May launch of a programme called SPHERES, which enlisted national and local health laboratories, private companies and academic institutions to deliver genomic sequences to public-health response teams.

The effort has not evolved into a national system, and individual academic laboratories do most sequencing rather than the country's large genomic centres, says Nathan Grubaugh, an epidemiologist at Yale University in New Haven, Connecticut.

As a result, genomic coverage overall is low. The number of SARS-CoV-2 genomes that the United States has shared on GISAID is less than 0.3% of its total number of COVID-19 infections. That compares with nearly 5% for the United Kingdom, 12% for Denmark, and almost 60% for Australia (see ‘Global surveillance'). A new variant in the United States would probably be detected quickly in certain states that have lots of active sequencing labs, such as New York and Washington, but would take a while in places that don't, says Grubaugh. This is a problem because the more a virus circulates, the more opportunities it has to change.

Some researchers are using cheap and fast polymerase-chain-reaction diagnostic kits to track variant B.1.1.7. But the kits are in high demand, and a recent study found that they can conflate the variant with others and so should be used with caution. 'We wouldn't be in this mess if we had a stronger genomic-surveillance system,' says Grubaugh.

The situation could improve with incoming US president Joseph Biden, says Grubaugh. 'I am hopeful that the new administration will tap into the expertise within SPHERES to help develop a national system,' he says.

The United States is not alone in its challenges. At a World Health Organization forum this week, Maria Van Kerkhove, an infectious-disease researcher at the agency, called on countries to increase their genomic surveillance. 'We really need to expand this so we have better eyes on the changes in this virus that are happening, especially in areas where transmission is most intense,' she said.

Van Kerkhove also encouraged researchers to upload sequences to global databases so they can be analysed on platforms such as Nextstrain, which help researchers to tease out mutations that might be important.

Pybus says that standard practices for recording metadata for genome sequences, such as a person's age, location and disease severity, are also needed. This will ensure that genomic analyses of new variants are accurate and meaningful.

Making sequencing hubs a permanent part of pandemic preparedness would improve responses to problematic variants of any infectious disease, and this is something that the United Kingdom is considering, says Peacock. She had to organize COG-UK in just a few weeks. 'There was no playbook for this,' she says.