How We Can Spot the Next COVID-19 Variant Even Faster

In Durban, South Africa, scientists led by Dr. Tulio de Oliveira, director of the Centre for Epidemic Response and Innovation (CERI) at Stellenbosch University, were conducting routine genomic surveillance of SARS-CoV-2 from different regions when they noticed worrying variations in genomes clustered in Gauteng Province. 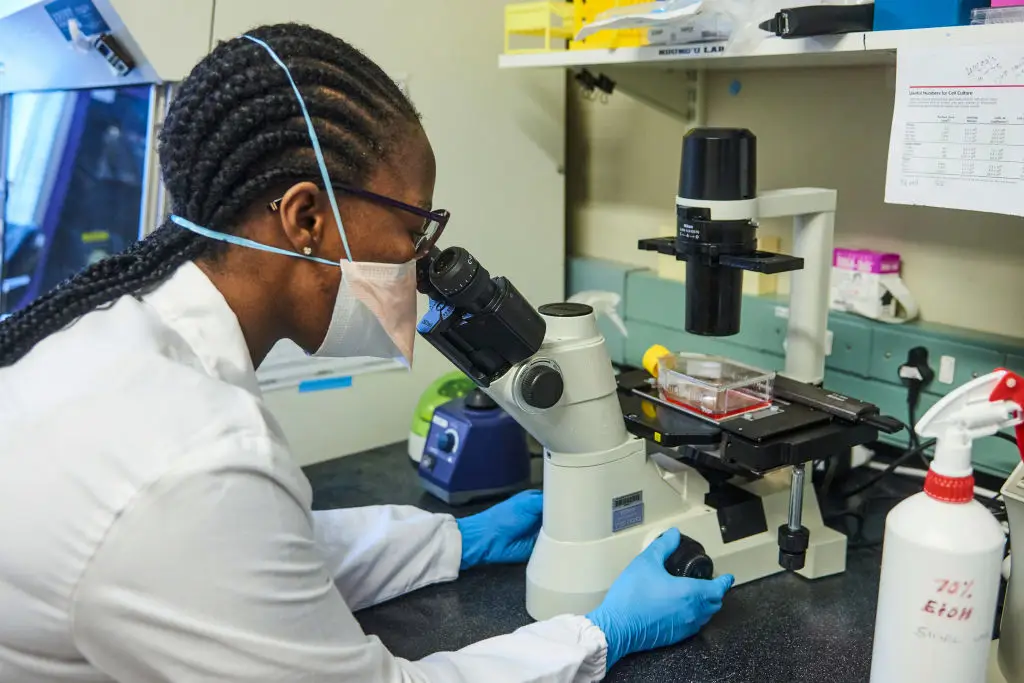 A technician uses a microscope to inspect samples during Covid-19 antibody neutralization testing in a laboratory at the African Health Research Institute (AHRI) in Durban, South Africa, on Wednesday, Dec. 15, 2021. South Africas hospital admission rate as a percentage of new Covid-19 cases identified dropped sharply in the second week of the current infection wave driven by the omicron variant, compared with the same week of the third wave. Waldo Swiegers-Bloomberg

They alerted their colleagues around the country and within their research network and simultaneously ramped up their analysis, eventually identifying additional examples of viruses with the new cluster of mutation in samples from other labs. Then, they sounded the alarm, notifying both their national government and the international community.

This is how scientists at CERI identified the new Omicron variant in November 2021—and how their peers in South Africa identified the Beta variant in December 2020. In each case, these experts took the right steps: sequenced the virus, identified a potential variation, confirmed its existence, shared the data, and raised a signal. As a result, the global scientific community could rapidly begin searching for the prevalence of the variant elsewhere, while researchers quickly gathered information about the new variant, including transmissibility, virulence, and whether current vaccines and treatments are effective against it. These are the basic knowledge gaps that public health officials, politicians, and the general public need to know to be able to speed the response and contain or stop the outbreak.

But the response to the news—including travel bans, stock market selloffs, proposed lockdowns, and more—suggests that the temptation toward self-interest may continue to make it difficult to end the pandemic and prevent the next one. While Omicron appears to be both more contagious and less severe than previous variants, there is still much to learn about it. But we do know for sure that the only way to contain Omicron and other variants—and ultimately make COVID-19 endemic—is to work together the same way that South African scientists and others around the world have done over the last few months. If we don’t, we’ll fail to prevent the next variant—and continue to lose lives and livelihoods to COVID-19.

The world already has much of what we need to contain new variants. Between the discoveries of the Beta and Omicron variants, genomic surveillance—which monitors the way a virus changes as it spreads through various populations by sequencing a representative sample of viruses—has increased across the globe. The cost of COVID-19 testing kits has declined in many countries. And that’s to say nothing of the miraculous vaccines and monoclonal therapeutics that were developed and authorized in record time.

Nearly 60 percent of the global population has received at least one dose of the COVID-19 vaccine. But there are vast discrepancies: about 72 percent of those shots have been administered in high- and upper-middle-income countries, while only 0.9 percent have been administered in low-income countries. This means variants will continue to spread—and are much more likely to emerge in less vaccinated populations than in highly vaccinated ones.

Until these kinds of inequities are addressed—until, for example, a large majority of people worldwide have been fully vaccinated, slowing the emergence of variants—global collaboration on surveillance is the only way to save lives.

Read More: Rethinking COVID-19 Restrictions for a World With Vaccines

We need a network of people and laboratories around the world doing more of what Dr. de Oliveira and his colleagues did late last year. They need to collect and scrutinize data from many sources, including wastewater and other environmental repositories, and dive deeper to understand how the virus is changing and quickly noting when a mutation has developed. Then they need to raise a signal for others to see and work quickly to get confirmation. Once they do, they need to share their determination widely, loudly, and swiftly. It is the only way to transition from the knee-jerk responses that have prevailed over the last two years to evidence-based public health measures and policy decisions that are more effective, timely, and collaborative.

Unfortunately, such a global network only exists in a rudimentary way right now—that’s one reason why, as fast as Dr. de Oliveira and his team worked, Omicron was already exploding undetected elsewhere. Fortunately, several global entities are being stood up to facilitate such information sharing. For our part, the Rockefeller Foundation has launched the Pandemic Prevention Institute (PPI), which will help create an early warning system to see the signal of an outbreak, speed the response, and stop the spread of the virus. Collaboration among the PPI and our partners like CERI is essential for the world to quickly identify and contain new variants.

There are many things that world leaders can do to facilitate a network, but I’d like to mention a couple here.

First, scientists must receive credit for their work. There is little incentive for them to participate and share the results of their research and analysis if it is not accredited to them. That’s one of the reasons that GISAID—an open-source database created by scientists, for scientists—has successfully enabled verifiable, transparent, and timely data sharing about SARS-CoV-2 and other pathogens. The GISAID community of scientists has shared over six million genomic sequences of SARS-CoV-2; thousands of sequences of the Omicron variant are being shared among scientists and governments around the world as I write this.

Second, countries should not be punished for sharing news about emerging variants or other pathogens of potential human consequence. Porous travel bans like the ones imposed on countries in southern Africa do little but penalize scientists and government officials who have acted in good faith by alerting the rest of the world about a potentially dangerous new pathogen. In addition to restricting personal or business travel, these bans also restrict the flow of reagents and supplies critical for tracking the spread of the virus and treating people in a potential hot zone. Instead of punishing nations for stepping forward, world leaders must laud them and provide critically needed resources to facilitate and accelerate the outbreak investigation and response.

To identify and contain new COVID-19 variants, we need a network of diverse partners—from the public and private sectors, academia and public health, animal and human health, and more—at all levels: global, regional, national, and local. By working together, we can share the work, divide the tasks, and focus limited resources where they might have the greatest impact, locally and globally. And if we do so with an approach rooted in trust, we will succeed. In fact, by working together, we can build a system that detects, mitigates, and contains outbreaks anywhere—before they become pandemics everywhere.