Fact Check: New BA.2 variant HAS NOT caused a spike in deaths for SA

‘Reported’ deaths in South Africa have increased substantially in the past week or so – but it’s got nothing to do with the BA.2 variant. 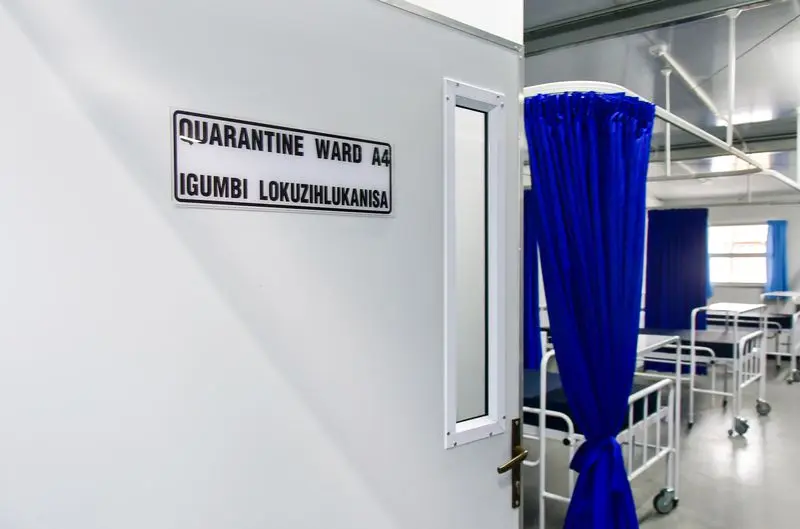 During the first few months of the COVID-19 pandemic, misinformation was relatively easy to spot. Raving lunatics would scream about 5G signals, and when the vaccines were produced, conspiracy theorists started bleating about ‘microchips in the jabs’. However, things are a bit more complicated with this new BA.2 variant.

To spot COVID-19 misinformation in 2022, you must understand that the devil is in the detail. In the past week, South Africa’s reported COVID-19 deaths have seemingly spiked, with the numbers topping 400 on some days. This comes as the BA.2 variant of Omicron officially accounts for ‘almost 100% of all cases’ in the country.

BA.1 was the original strain of Omicron, but BA.2 has a few further mutations, and a slight transmission advantage. However, numerous studies from across the world have proved that this newer variant has barely had any impact on hospitalisations or deaths. However, some people won’t let facts get in their way.

WHY HAS THE REPORTED COVID-19 DEATH RATE INCREASED?

A number of prominent social media accounts – with huge online followings – have tried to put two and two together, only to fail dismally. Their claims that mortality rates are soaring in Mzansi as a result of BA.2’s dominance isn’t just disingenuous – but down-right sinister.

Omicron has barely laid a glove on the South African public, more than three months since it was first discovered. BA.2 has been present within our borders since the end of last year, and it hasn’t put any further pressure on healthcare systems. And, if our top scientists aren’t worried about BA.2, none of us should be.

Tulio de Oliveira is one of SA’s leading experts on COVID-19. He can scarcely believe some of the claims being made. The professor calmly explained this weekend that the high death rates reported in February 2022 are the result of data consolidation – and backlogged cases are being added to daily totals:

“There is so many misinterpretations of deaths with omicron, specially BA.2, which currently dominates in SA. Please note that most of our daily deaths reported are old ones due to data consolidation: So 319 deaths were officially logged on Saturday, but only nine occurred in the last 24 hours.”

“I have seen absolute nonsense analysis of recent death of Omicron BA.2 in South Africa around the world. Please note that South Africa has a very high population immunity, good vaccination in people over, 40 and had a very severe Beta, Delta and Omicron waves – the low hospitalization and deaths of BA.2 is confounded by those facts” by Tulio de Oliveira

DATA BACKLOG, AND NOT NEW BA.2 VARIANT, TO BLAME FROM INCREASE IN DEATH RATE

On Saturday, 319 COVID-19 deaths were reported in South Africa – but only nine of them occurred within the last 48 hours. A total of 343 deaths were reported on Friday, with just four of them registered in the same timeframe. This pattern goes on over the last 7-10 days, according to data provided by the NICD.

(That data, by the way, shows both reported deaths AND deaths within the last 24-48 hours) 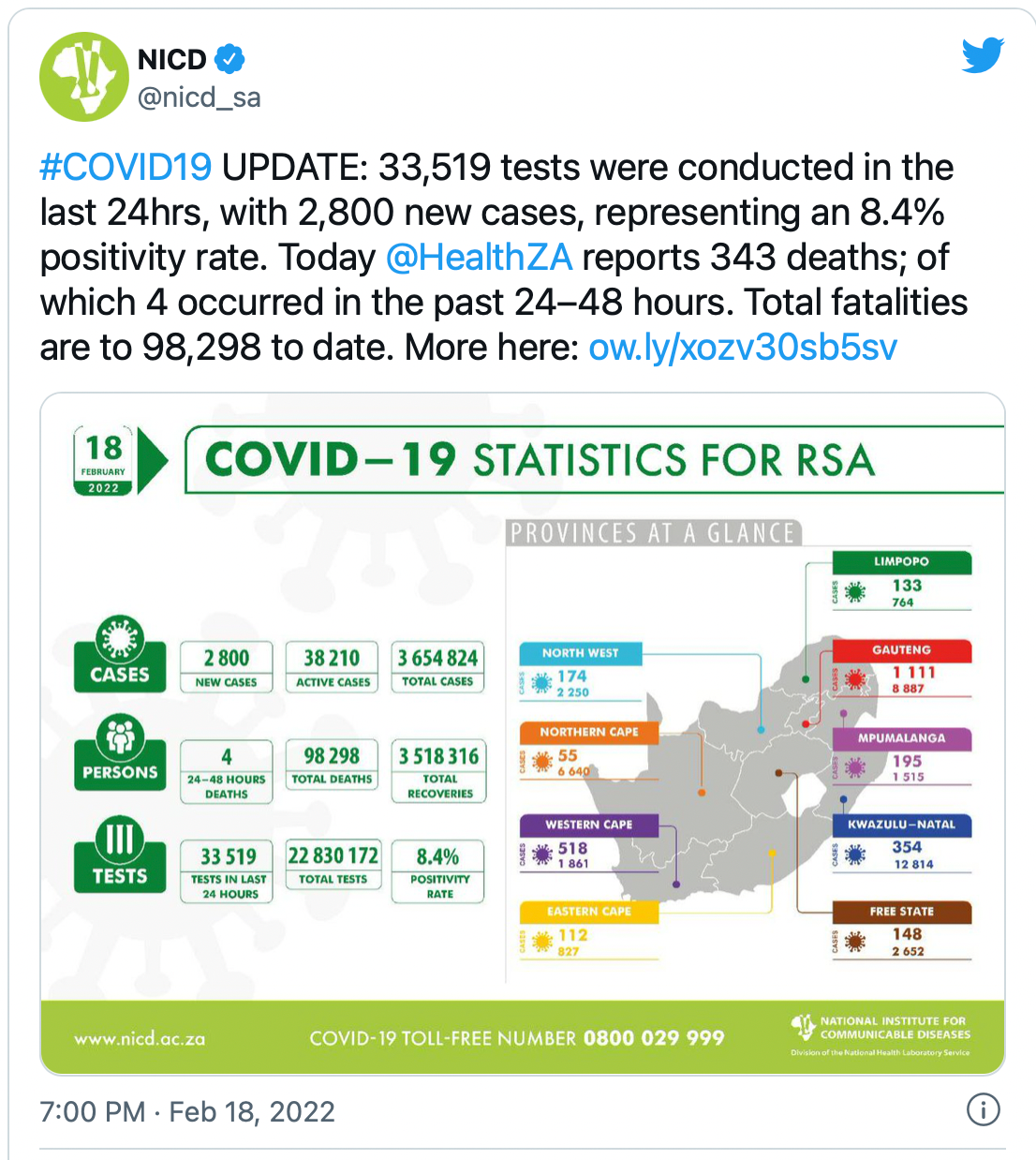 So there’s the bottom line: South Africa’s reported deaths have only risen artificially, due to data consolidation. The increase has NOTHING to do with the presence of the BA.2 variant. And, for those who might need a little more convincing, three separate virus experts have produces these helpful visual aids…

The green line shows REPORTED cases, which includes a data backlog. But, looking at both public AND private hospital deaths, they continue to trend in a downwards direction: 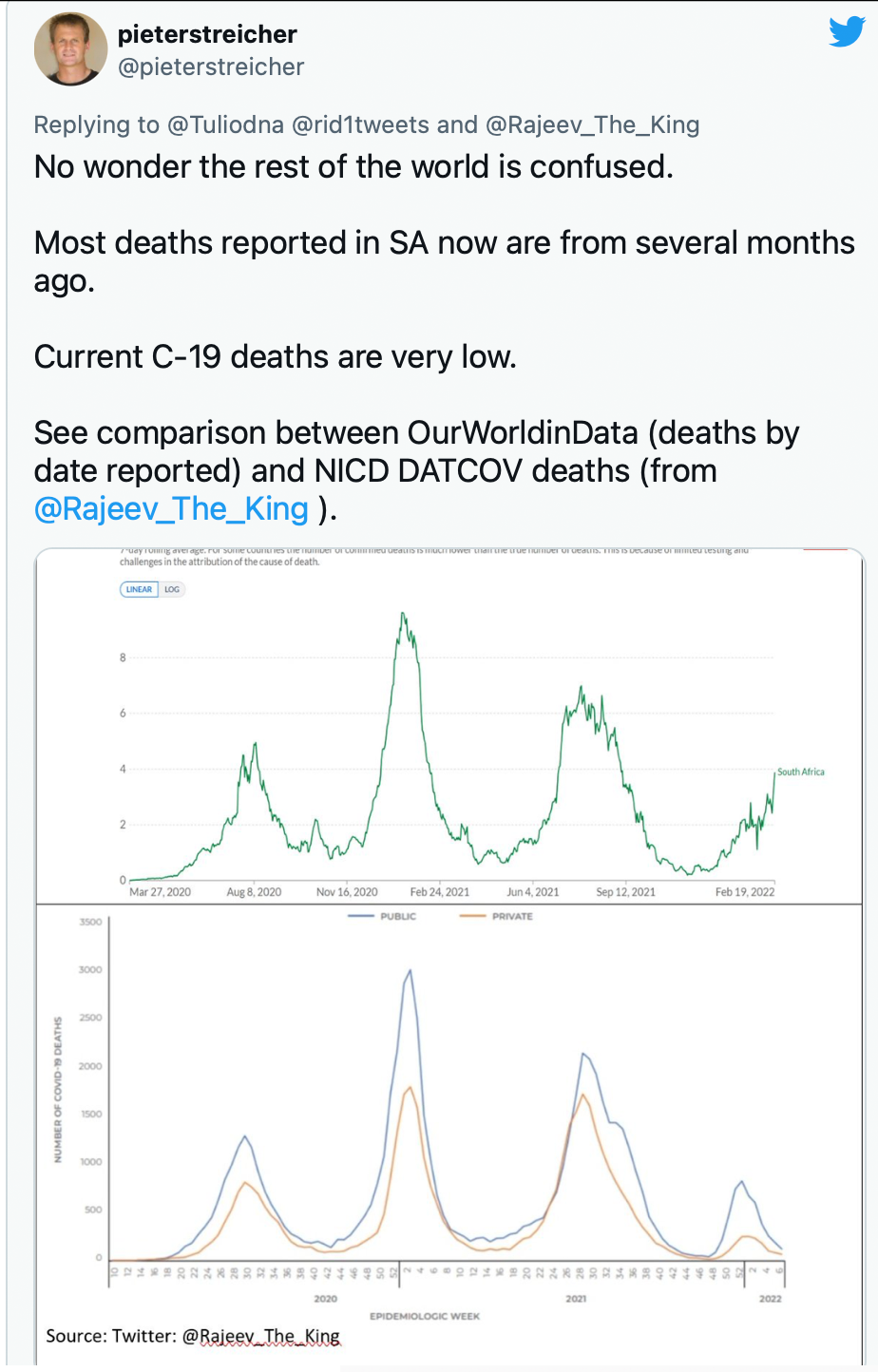 Both weekly excess deaths AND weekly in-hospital deaths have decreased substantially, at the same time as reported deaths saw their anomalous increase: 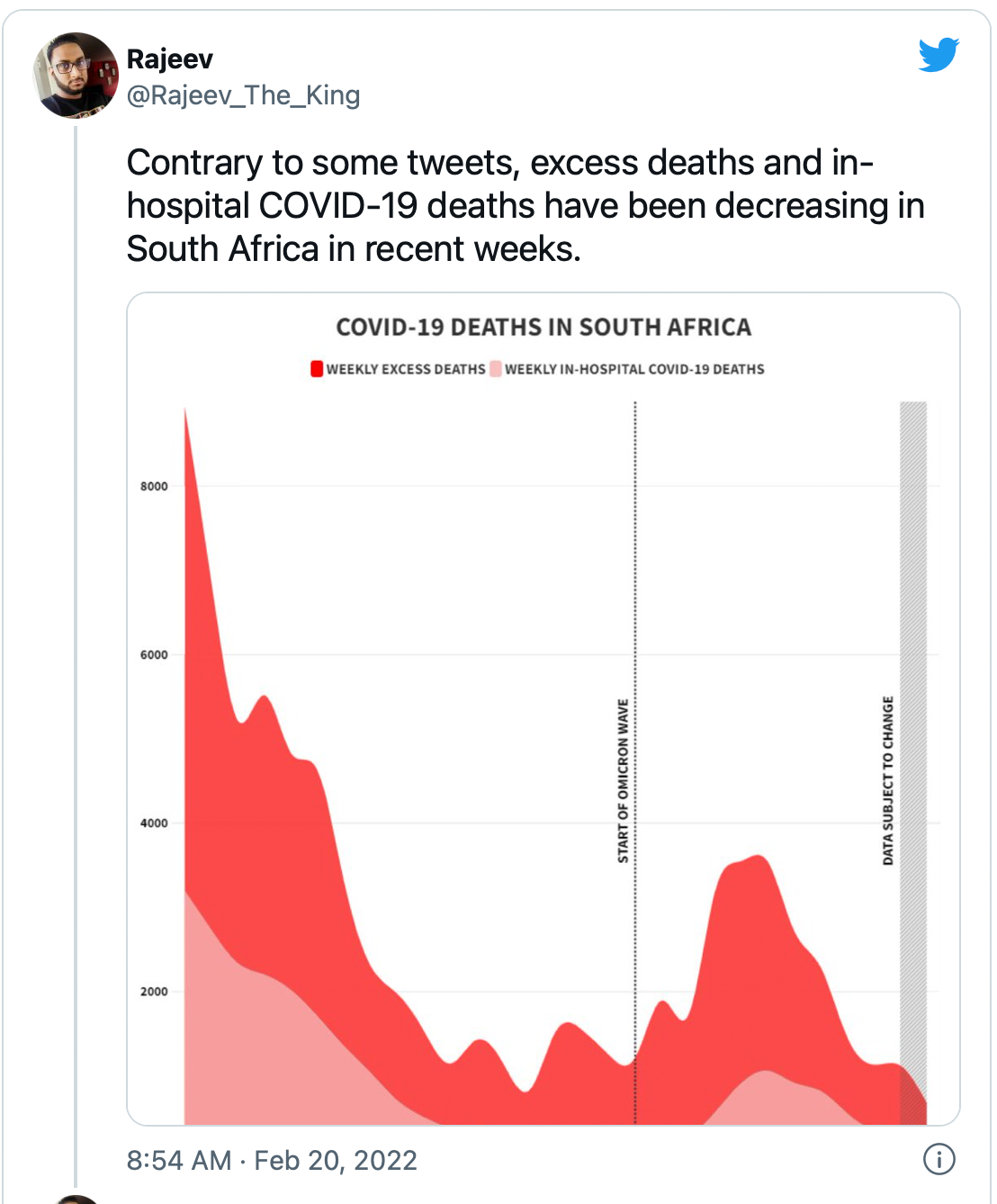 If you’re a doommonger, look away now. This chart shows how reported COVID-19 deaths are not trending in line with decreasing excess deaths, and falling hospital deaths. 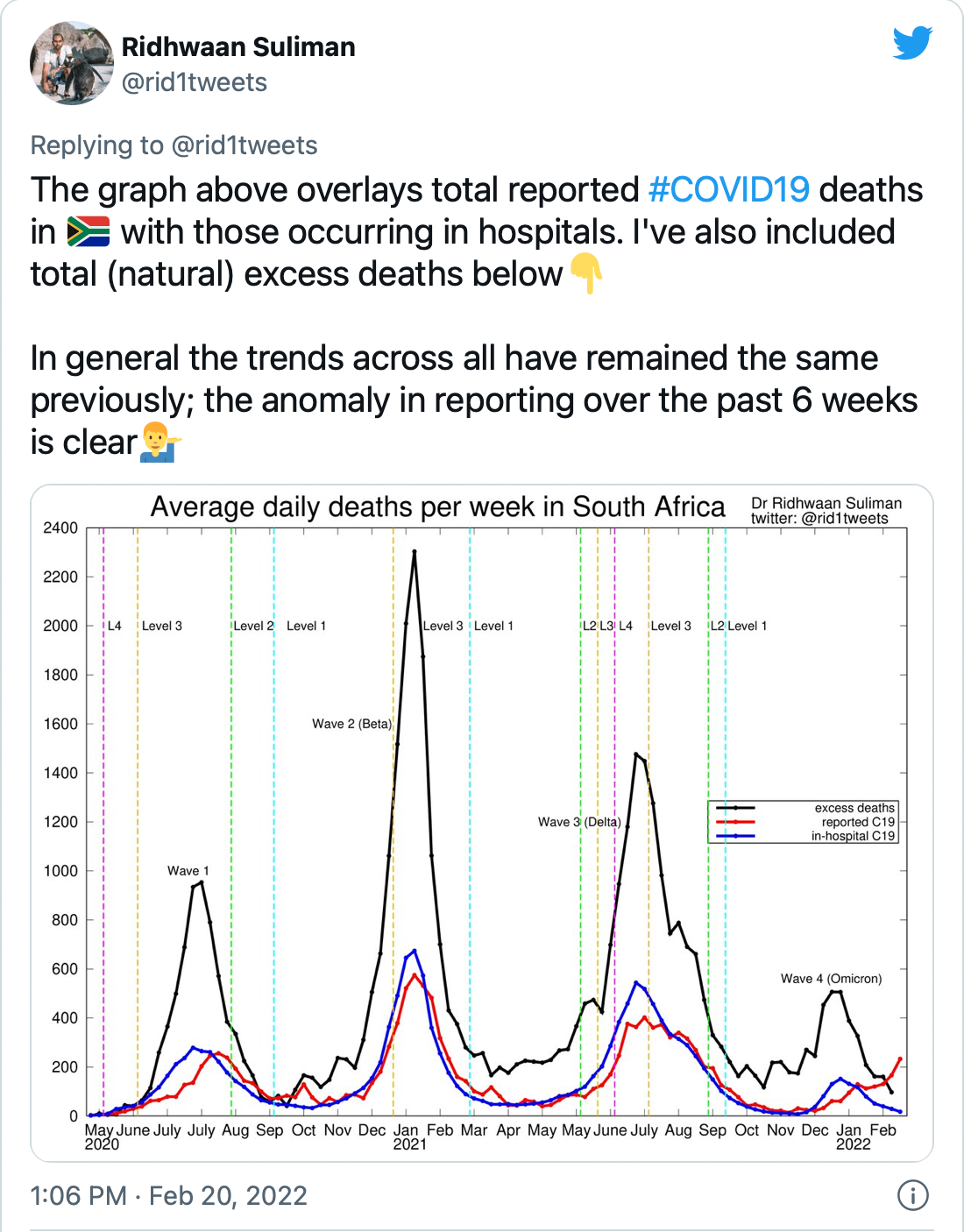